In carrying out its mandate, UNOCA works closely with the Economic Community of Central African States (ECCAS), the Economic and Monetary Community of Central Africa (CEMAC), the International Conference on the Great Lakes Region (ICGLR), the Gulf of Gui­nea Commission (GGC), Lac Chad Basin Commission (LCBC). UNOCA assists them in the promotion of peace and security in the sub-region. In the same vein, UNOCA works in cooperation with the African Union (AU), in particular, to coordinate United Nations efforts to fight against the Lord’s Resistance Army (LRA). The two institutions have developed a regional strategy that provides for, inter alia, coordinated international humanitarian assistance and peacebuilding initiatives in the countries affected by the activities of the LRA (declared by the AU as a “terrorist group”). The Security Council endorsed the strategy on 29 June 2012. 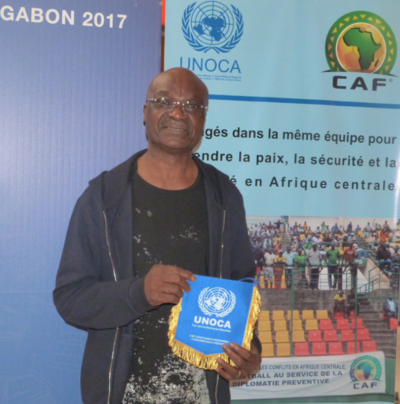 UNOCA also shares good relations with the European Union (EU), the International organisation of La Francophonie (IOF) and the civil society as well as other partners and stakeholders, including the Confederation of African Football (CAF). With the latter, the Office co-organized a “football match for peace and security in Central Africa” on 7 December 2012 in Brazzaville (Congo) between the “Tout Puissant Mazembé” of the Democratic Republic of Congo and the “Diables noirs” of Congo - during the 20th Anniversary of the United Nations Standing Advisory Committee on Security Questions in Central Africa (UNSAC).

The 31st African Cup of Nations (AFCON) in Gabon (January-February 2017) was an opportunity to strengthen this partnership through several joint actions that allowed to raise awareness on the importance of peace and security for sustainable development and regional integration in Central Africa.