The Ugandan troops will continue to play their role 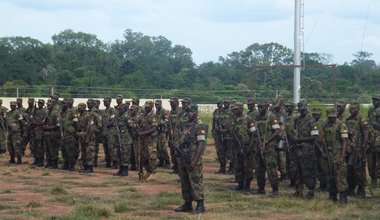 The 2000 Ugandan soldiers handover to the Regional Task Force (RTF) of the African Union (AU) in charge of the "elimination" of the Lord's Resistance Army (LRA) will continue to play their role in this initiative, including those operating in the Central African Republic (CAR), where they have been working in cooperation with national forces to track down the elements of the armed group led by Joseph Kony.

It is one of the main outcomes of the meeting that took place in Kampala on 3 April between the AU, the UN and the Ugandan authorities – represented by the Minister of Foreign Affairs, Mr. Sam Kutesa, and his colleague of Defence Mr. Crispus Kiyonga. "The sudden change of regime in CAR has caused confusion in some minds. I want to reassure the national and international opinion that this has no impact on the commitment and the determination of the Ugandan authorities to support the fight against the LRA, "says Mr. Francisco Madeira, the AU Special Envoy for the LRA.

"There is no reason to consider any suspension of the participation of the UPDF (Uganda People's Defence Force) or even that of other troops already in place. It should be recalled that it is an authorized Force led by the African Union on the basis of a decision of the sovereign states concerned, "explains Mr. Madeira, convinced that his upcoming visit to CAR will clarify and strengthen this position. "We have no doubt of the interest that the new leaders will give to this issue," he added, praising their willingness to adhere to the recommendations of the Extraordinary Summit of Economic community of Central African States (ECCAS) held on 3 April in Ndjamena (Chad) and devoted to the crisis in CAR following the takeover on 24 March by the rebel of "Seleka."

"The United Nations is very attentive to the evolution of this situation, given the negative impact of the LRA activities not only on peace and regional security, but also its unacceptable humanitarian consequences," indicates Mr. Abou Moussa, Special Representative of the Secretary-General and Head of the UN Regional Office for Central Africa (UNOCA). The regional strategy against the LRA developed by the UN and its partners takes into consideration all these aspects.

"We must not give any chance to Joseph Kony..."

"We encourage all stakeholders to support the implementation of this strategy, whose one chapter is related to the support for the operationalization of the African Union Initiative against the LRA and, in particular, its military component, the Regional Task Force, "indicates Mr. Abou Moussa. "We must not give any chance to Joseph Kony and his elements to believe that there is a release and that, they can continue to commit atrocities on the people with impunity," underlines the Special Representative of the UN Secretary-General for Central Africa, welcoming the strong continued attention of partners to this issue.

In this context, the working session of Abou Moussa and Francisco Madeira with the U.S. Ambassador to Uganda (Mr. Scott DeLisi) on 4 April allows to have confirmation of the maintenance of American military advisors deployed in the region in late 2011 to support the ongoing efforts in the fight against LRA. The U.S. government has also promised $ 5 million reward for any information leading to the arrest of rebel leader Joseph Kony and his top commanders, Okot Odhiambo and Dominic Ongwen. They are, moreover, sought by the International Criminal Court for; inter alia, crimes against humanity and war crimes.

"We look forward to the end of the horrible moments that the citizens of the affected countries live. We do not have to forget that besides many deaths caused by the LRA atrocities, an estimated 440,000 people are refugees and displaced persons forced to leave their families to escape from the brutality of the armed group, "concluded Abou Moussa and Francisco Madeira. The joint mission that they conducted from 27 March to 4 April in South Sudan, DRC and Uganda has helped increase awareness on this situation and to be sure of the continued commitment of authorities and partners to consider the fight against the LRA as one of their main priorities.

On 1 September, in Libreville (Gabon), the UN Regional Office for Central Africa (UNOCA) participated in the Africa Climate Week (ACW 2022) during a side event under with the theme “Roles of the Congo Basin rainforest, biosphere