Mr. Ban for a High-Level Meeting on the sidelines of the General Assembly 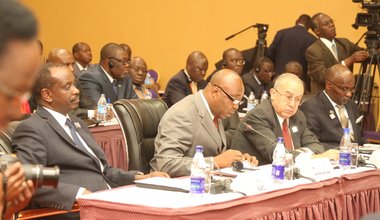 At the Mini-Summit of Heads of State and Government of the International Conference on the Great Lakes Region (ICGLR), on Saturday 8 September in Kampala (Uganda), the UN Secretary-General, Mr. Ban Ki–moon, expressed his intention "to convene, on 27 September in New York, a High-Level Meeting on the situation in Eastern Democratic Republic of the Congo (DRC)".

In a message delivered by Mr. Abou Moussa, his Special Representative and Head of United Nations Regional Office for Central Africa (UNOCA), the UN Secretary-General stated that this High-Level Meeting, which will be held in the margins of the UN General Assembly, "would provide a platform for further dialogue aimed at reinforcing regional efforts to find a peaceful resolution to the crisis in Eastern DRC", where the March 23 Movement (M23) has been fighting government forces over the last few months. 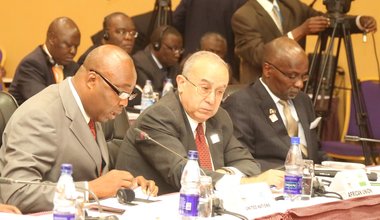 Mr. Ban Ki-moon announced that the Under-Secretary-General of the Department of Peacekeeping Operations, Mr. Hervé Ladsous, would be visiting the region from 9 to 15 September in preparation for the High-Level Meeting. He also appealed to ICGLR Members and international partners to participate in the High-Level Meeting, especially given the urgency of the situation on the ground.

The UN Secretary-General recalled that the security and humanitarian conditions remained precarious in Eastern DRC, stressing that this worrying situation posed a threat to regional stability. Mr. Ban Ki-moon noted that "the humanitarian situation remains dire", with over 226,000 people displaced in North Kivu alone in the past several months while over 57,000 Congolese have crossed into Rwanda and Uganda.

"While there has been a lull in military activities by the M23 in North Kivu since July, the situation remains very fragile, and I call for the group's immediate and complete cessation of all destabilizing activities", underlined Mr. Ban Ki-moon. He, once again, condemned "the violence and serious human rights violations committed by the M23, as well as other armed groups, against civilians, which need to be thoroughly investigated by relevant institutions and the perpetrators held accountable".

In addition, the UN Secretary-General mentioned that he is "deeply concerned at the continuing reports of external support to the M23". He therefore called "for an end to all such support without delay".

The UN Secretary-General also welcomed the initiative of Heads of State and Government of the ICGLR to meet for the third time since July in the framework of a special Summit dedicated to the political crisis in the Eastern DRC. He expressed the hope that "further progress will be made in developing a roadmap of initiatives to address the situation in eastern DRC". 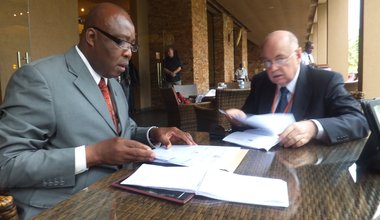 Mr. Ban Ki-moon mentioned that "the military deterrence alone will not resolve the current crisis". In that context, he "strongly encourages continued and strengthened high-level dialogue at the bilateral and regional level aimed at finding a durable solution including through addressing the underlying causes of the conflict".

He recalled that the United Nations stands ready to support those efforts, as appropriate, in cooperation with the African Union and regional and international partners.

At the end of the meeting, Mr. Abou Moussa had a working session with Mr. Roger Meece, Special Representative and Head of MONUSCO (see photo). He shared with his colleague the content of the discussions and the main resolutions of the Mini-Summit.

Our press release issued after the Summit.

On 1 September, in Libreville (Gabon), the UN Regional Office for Central Africa (UNOCA) participated in the Africa Climate Week (ACW 2022) during a side event under with the theme “Roles of the Congo Basin rainforest, biosphere