MR. ABOU MOUSSA SENSITIZES AMBASSADORS ON THE CHALLENGES OF UNOCA.

MR. ABOU MOUSSA SENSITIZES AMBASSADORS ON THE CHALLENGES OF UNOCA.

The SRSG and Head of UNOCA, Mr. Abou Moussa received the diplomatic corps in Gabon, on October 26, 2011 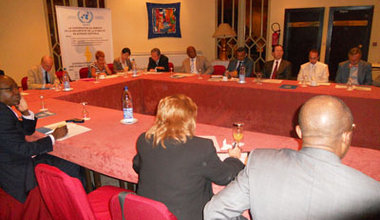 The Special Representative of Secretary-General and Head of UNOCA, Mr Abou Moussa received the diplomatic corps in Gabon, on October 16, 2011.
About twenty ambassadors or their representatives were present. This allowed Mr. Abou Moussa to enlighten them on the progress of the Office and the main resolutions of the seminar on issues of peace and security organized by UNOCA in Libreville from October 10 to 11, 2011.
The exchange between Mr Abou Moussa, and ambassadors have mostly focused on the mandate of UNOCA, the functioning of the coordination mechanism between UNOCA and the UN Agencies in the sub-region, the approach as part of the fight against the Lord's Resistance Army (LRA). The degree of UNOCA's involvement in managing the pre-and post-election periods in several countries in Central Africa was also at the heart of concern.
Mr Abou Moussa, who was accompanied for that occasion by his closest collaborators, broughts to each question all the necessary lighting. 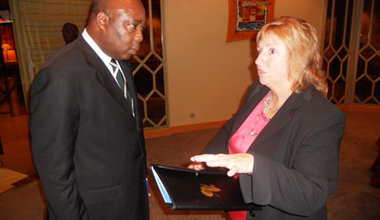 Participants expressed the hope that such briefings being multiplied and their agenda, extended to matters of common interest between the United Nations and the various States members.
News articles
Print Email Twitter Facebook