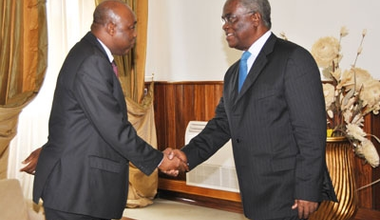 The Special Representative of the UN Secretary-General and Head of the United Nations Regional Office for Central Africa (UNOCA), Mr. Abou Moussa, on Tuesday 1 November ended a three-day visit to Sao Tome, the capital of Sao Tome & Principe. The meetings with national authorities enabled him to return to the mandate of the UNOCA, an institution created at the request of Heads of States of the Economic Community of Central African States (ECCAS) to support and coordinate efforts into consolidating peace and preventing conflicts in the region.

The Minister of Foreign Affairs and Communities, Mr. Salvador dos Ramos, insisted over the necessity to sensitize Member States so that they actively and financially participate in the attainment of these main objectives. He further expressed concern on the slow participation of most of them in the contribution to the operation of the United Nations Standing Advisory Committee on security questions in Central Africa (UNSAC), whose secretariat functions was entrusted to UNOCA in May 2011.

Mr. Salvador dos Ramos indicated that he relies on the assistance of the Special Representative of the UN Secretary-General to help his country to defend this cause. Indeed Sao Tome & Principe ensures the presidency of UNSAC, after having hosted in March 2011, the 32nd meeting of Ministers of Defense and Security of the Central Africa - who will in principle meet in Bangui (CAR) in December for their 33rd session. 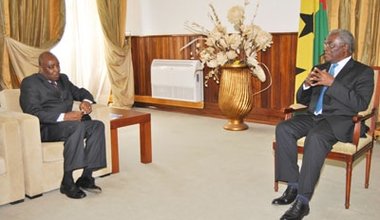 He also requested UNOCA to examine ways and means to facilitate the signing, by all the countries of ECCAS, of the Kinshasa Convention for the control of small arms and light weapons, ammunitions and all parts and components that can be used in their manufacture, repair and assembly. He revealed that Sao Tome & Principe has already initiated the process of ratification of this Convention, stating that the National Assembly will decide by December 2011.

« It is an essential document. Its entry into force will certainly contribute to promoting the stability and prosperity the people in Central Africa need », noted the Head of UNOCA, who reasserted the commitment and determination of his office to work for peace in the region. Mr. Abou Moussa gave the same assurance to Mr. Carlos Olimpio Stock, Minister of Defense and Public Security and to his colleague of Justice and State Reform, Mr. Elisio d'Alva Teixeira. He also listened carefully to Mr. Sylvestre da Fonseca Leita, President of the Supreme Court, to whom he pledged the support of UNOCA regarding among other things the training of officials. « Without justice, there is no peace », said Mr. Abou Moussa, who assured all his interlocutors of the commitment of the United Nations in the process of securing the Gulf of Guinea. In this regard, he noted that at the request of Benin, the UN Secretary-General decided to send, in the coming days, a mission to this region.

Shortly before leaving Sao Tome on Tuesday 1November, the Head of UNOCA met with President Manuel Pinto da Costa and held a meeting to exchange information with Diplomats. The five agencies of the United Nations present in Sao Tome & Principe (UNICEF, UNDP, WFP, UNFPA, WHO) played an important role in the success of his stay.

UN, ECCAS and their partners mobilized against hate speech in Central Africa

Call for applications for the recruitment of an international Consulta