SEMINAR OF THE SPECIAL REPRESENTATIVES, THE REGIONAL DIRECTORS AND THE RESIDENT COORDINATORS

SEMINAR OF THE SPECIAL REPRESENTATIVES, THE REGIONAL DIRECTORS AND THE RESIDENT COORDINATORS

Issues of peace and security in the centre of United Nations Seminar in central Africa. Special round-up 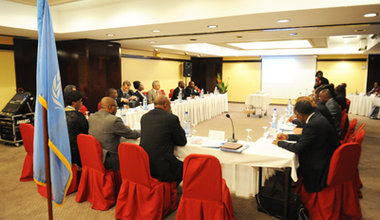 The efforts of UNOCA since its launch in March 2011 as well as the background and objectives of the seminar were clarified in the opening session, which featured the participation of the Secretary- General of ECCAS, Mr. Louis-Sylvain Ngoma.
The session on the meaning of coordination clarified the fact UNOCA will be relying on credible information from the UNCTs and Regional presences, but would in turn have to help compiling and sharing that information and best practices back to all. 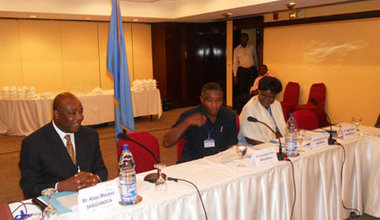 The presentation and interactive session with Mr. Ngoma on creation, evolution and efforts of the peace and security arrangements the organization, in particular the Protocol on COPAX, which defines its architecture and instruments, has enhanced the understanding of participants. The information provided regarding the process for its establishment, including the exercises organized in Chad in 2007, and certification exercise of May-June 2010 in Angola, and its present size of 3700 forces tested and trained in deployment capacity constitutes has been useful.
Responding to the inquires from participants, Mr. Ngoma concurred on the need to focus of prevention, which is less costly. He further described the internal functioning of structure of ECCAS on Peace and Security. Regarding its outputs, he described the daily, weekly, monthly and yearly information process in which vital information and briefs were shared to Ambassadors of Member States in Libreville on early warning. He however, noted that modalities on the use and decision-making on early warning information remains unaddressed.
The fact that COPAX consist mainly of contingents in member states, underscores the importance of initiatives at the level in support of its strengthening.
From the presentation of the Secretary-General, ECCAS is clearly addressing several issues not covered in the protocol establishing COPAX. Its first Mission MICOPAX1 deployed in the Central African Republic in 2008, consisting of 700 troops including formed Police United and companies provided by a number of countries in the subregion, is scheduled to drawdown in 2012, following an exit strategy that would include the transfer of transfer of competences to FACAR. Contingency planning by the UN to help fill any vacuum that be created by the drawdown of MICOPAX might be necessary.
The information provided regarding other efforts of the ECCAS including in the observation of elections and the mandate given to the Secretariat in the Protocol on the Gulf of Guinea to secure the Gulf in addition to state efforts such as sea patrols, constitute areas where the UN could assist the organization . 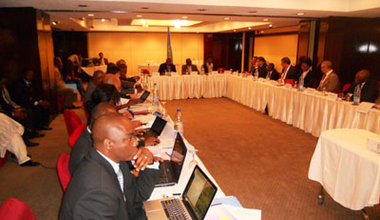 The need to understand areas where respective UN presences in the subregion could optimize their comparative advantages has been underscored as an important element in the coordination between UN efforts with those partners of the central African Region.
The interactive discussion with the ECCAS Secretary-General focused on the efforts of the organization in addressing other underlying causes of conflict. The needs for clear terms of references on the efforts of each UN body, as well as the need for a clear delineation of roles were stressed. Participants also underscored the importance of strengthening regional capacities for early warning. In this connection they requested UNOCA to undertake a mapping of early warning mechanisms in the subregion, to facilitate awareness and deep undertstanding of how the UN could be of support to efforts in this area.
Noted the need for lead actors to ensure effective of UN efforts on specific issues;
Underscored the need for burden sharing for coordination of UN efforts;
Underscored the importance of unity of purpose and agreement of the beneficiaries of UN interventions for their effectiveness;
Noted the need to address coordination between the AU, ECCAS and the UN, where countries are all represented and policies are being developed in parallel on the same issues;
The need for encourage member states to enhance their participation in ECCAS was also stressed, in order to strengthen the capacity of the subregion to tackle the challenges it faces, while drawing necessary support from External actors.
Regarding resource mobilization for ECCAS, attempts at implementation systematic collection of contribution to ECCAS are still evolving, and are crucial for capacity-building ; 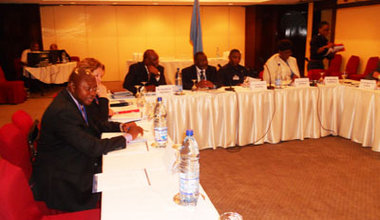 The second part of the session featured presentations by UN regional presences on the situation and efforts on their respective areas of competency, by the situation in their various, UNREC, OHCHR, and UN Women. The SRSG Muita briefed the meeting on the establishment of his Office, its efforts and the persisting challenges of coordinating the multiple UN actors in Addis, while also highlighting vital comparative advantages of the Office in relation to the AU.
The representative of UN Women described the situation of women in the subregion, in particular with respect to political participation and implementation of resolution of 1325 and related resolutions. While noting the leading role of certain countries, he deployed the large number of countries still lagging behind the global standards.
The need for special initiatives to boost efforts by member states of the subregion for protection and empowerment or women, and to address youth unemployment were was noted.
In the third part, the various RCs discussed the main peace and security issues that impact on their activities, notably the challenges they meet in the implementation of their respective UNCT/UNDAF programmes related to governance, peace and stability. The seminar heard very detailed and informative presentations by the RCs of Gabon, Equatorial Guinea, Congo, Burundi, Angola, and Sao Tome and Principe. The presentation described the political and socio-economic trends in various countries and clearly demonstrated the partnership between the UN and Member states of ECCAS.
In the final part of the 1st session on Regional and Cross-Border Issues in Central Africa provided SRSG Moussa reassured participants that the role of UNOCA would not undermine their respective mandates but rather provide them on strategic political issues and on cross border challenges. The role of UNOCA in assisting with delicate political issues, and situational analysis was underscored. UNOCA also indicated its readiness to prepare and share information on the added-value of the Office to the work of the UNCTs.
The Seminar has been informed about the transfer of the Secretariat functions of the UN Standing Advisory Committee on Security Questions in Central Africa from UN Office for Disarmament Affairs (ODA) to UN Department of Political Affairs (ODA) to be assumed by UNOCA. Noting that the 33rd Meeting of the Committee was scheduled to take place from 5 to 9 December 2011, in Bangui Central African Republic, the importance of the support of UN presences in the support for the effective discharge of secretariat functions of the Committee by UNOCA is clearly needed.
News articles
Print Email Twitter Facebook