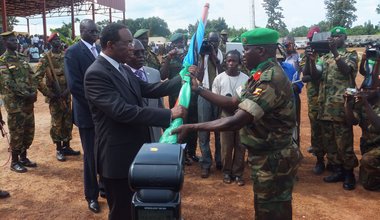 Two thousand (2,000) soldiers from the Uganda People's Defence Force (UPDF) and 500 from the Sudan People's Liberation Army (SPLA) have been officially handed over to the Regional Task Force (RTF) of the African Union (AU) established to hunt down rebels of the Lord's Resistance Army (LRA), on Tuesday 18 September in Yambio (State of Western Equatoria), more than 350 kilometers from Juba, the capital of South Sudan.

"This important moment is the culmination of our collective efforts to put an end to the activities of the LRA, a renegade rebel movement that has become infamous over the years for the untold sufferings wrought upon the local populations of the affected countries", stated Mr. Abou Moussa, Special Representative of the UN Secretary-General and Head of the United Nations Regional Office for Central Africa (UNOCA), which coordinates UN efforts to address the threat posed by the LRA. He welcomed this decisive step, thanking the "troop contributing countries for their efforts and commitment despite other pressing national priorities". 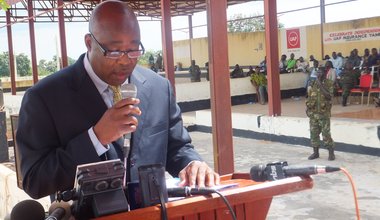 Mr. Abou Moussa indicated that he United Nations will continue to support the AU and other partners, in the implementation of the regional strategy against the LRA adopted by the UN Security Council on 29 June 2012. Mr. Abou Moussa emphasized the need to quickly implement the strategy. He commended the outstanding work that the various UN missions on the ground have been doing over the years to address the LRA threat. He mentioned in particular the UN Mission for Stabilization in Democratic Republic of Congo (MONUSCO) and the United Nations Mission in South Sudan (UNMISS), which provide support to national authorities in the two countries in their responses to the LRA.

"The UN Peacekeepers have been offering military escorts and patrols in and around villages and towns where the LRA has been seen, thereby maintaining a level of security that has saved lives", noted Mr. Abou Moussa. He also mentioned the United Nations Office to the African Union (UNOAU), which provides logistical and technical support to the AU's Regional Cooperation Initiative the against the LRA. The United Nations Integrated Office in CAR (BINUCA) also plays an important role in the operationalization of the initiative. 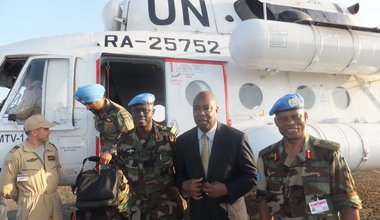 Mr. Abou Moussa called for efficient and effective coordination between the Regional Task Force and all stakeholders including the UN Missions and offices, with a view to combating the LRA and providing security to innocent civilians. "Together we will succeed," concluded the Head of UNOCA, congratulating troops made available to the AU for their courage and determination to work for this noble cause.

The AU Special Envoy for the LRA issue, Mr. Francisco Madeira, expressed his gratitude to the United Nations, the European Union, the USA (represented at the ceremony) and all other partners for their support. However, he drew attention to the challenges ahead, highlighting the urgent need to mobilize additional logistical, material and financial resources to facilitate the work of the forces deployed in the theatre of operation. Ministers of Defense of Uganda and Deputy Minister of Defense of South Sudan expressed support for the AU initiative and his challenges. They noted that the cooperation between the different forces should be maintained and strengthened. They also called for the respective authorities to facilitate cross border operations.

The ceremony in Yambio follows an earlier one in Obo (Central African Republic) where 360 soldiers of the Forces Armées Centrafricaines (FACA) were handed over to the AU on 12 September. Mr. Madeira noted that the authorities of the Democratic Republic of the Congo assured him that in the near future Congolese troops would be handed over to the AU in Dungu, in North eastern DRC.